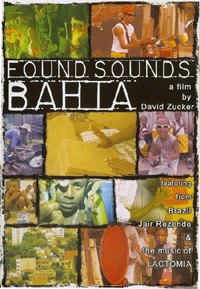 Found Sounds Bahia isn’t just an entertaining film. It’s also full of ideas and possibilities that you can explore on your own or bring back to your community. The film motivates you to think not only about the value of reuse and recycling, but also things like the role of community leaders in inspiring young people, the need for artistic expression in community life, and the different forms that creativity can take.

Because it is about a group of young people, Found Sounds Bahia has the potential to be particularly meaningful for young people and those who work with them as teachers, community leaders and even parents. On this page you’ll find a few thoughts on how Found Sounds Bahia can work in the classroom or in other contexts with young people. What follows here are several topics for discussion following a viewing of the film, with an emphasis on ideas which might lead to group projects or other actions and activities.

How are the young people shown in Found Sounds Bahia like or unlike the youth in your community? Do they have different wants, needs, or interests? Candeal, the community in which the film takes place, is a low-income area in the Brazilian state of Bahia. Does that background make these kids different from American kids or kids from wealthier backgrounds?

The film shows how the young man Jair Rezende set out to create a musical group using recycled materials to make the instruments. Would a project like this work in your community? Could it be done through school, a church organization or community organization? Could it be done in partnership with a local landfill, or with a local conservation organization? Are there musicians or other artists in the community who would like to give their time by helping to develop and guide such a project? Would the kids be into it?

The young people in the film use recycled materials to make musical instruments and costumes for their performances. These are great creative ideas! But are there other sorts of things you can do to make use of commonly available throw-away materials in your area? What about other sorts of art – sculpture or site-specific installations? Stage sets for theatrical performances?

It’s also possible to use recycled materials to make useful things that aren’t necessarily artistic. For instance, some people have made very good sandals using the rubber from old tires to make the soles. They work fine and the rubber soles lasts forever! Can you think of other practical items that can be made from recyclables? Might some of them even have economic value, with the potential to raise money for a worthy cause or for the students themselves?

What sorts of cast-off materials are most common in your area? Around here and in many other places, the current leader seems to be plastic water bottles and soda pop bottles. Can you think of good uses for the most common throw-aways in your area? (See below for some ideas for plastic bottles.)

Most of the musical instruments Lactomia was shown playing were percussion instruments. But many other sorts of instruments can be made from recyclables. Can you come up with ideas?

The topics and ideas you’ve seen here are just starters. You may come up with other, equally effective discussion topics and project ideas to explore.

Colors of a Creative Culture 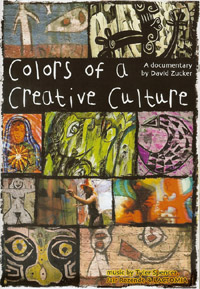 Colors of a Creative Culture introduces us to artists in and around the city of Salvador, Bahia, Brazil. In the film we see them engaged in community arts projects designed to counteract the visual pollution of graffiti and commercialism by filling public places with colorful hand-painted art. In both street interviews and studio interviews, the artists reveal their thinking about the value and importance of public art – how it breaks down barriers, how it brings art to people who might otherwise have little access, how it keeps the art rooted and creates a sense of purpose. We see children and adults joining professional artists in arts activities in a mood of fun and celebration. We hear a parish priest invoking parallels between spirituality and artistic expression, and speaking of the need to bring art to where the people are. One of the artists explains, “It’s important to have art on the streets, because it breaks down the idea that art is something underground, out of reach of most people.” “Street art is important,” another comments, since “not everyone can pay to get in a museum or has the money to travel.” All of the artists’ actions and comments reflect the ways in which art can draw depth and meaning from the community that nurtures it. As the priest observes, “Our creation originates in the life we live.”

Vibrant art and music, bright-eyed children, and engaged and creative adults, all in this distinctive Afro-Brazilian cultural context – these things are inherently inspiring. They also give rise to thoughts and ideas that go beyond this particular context. Because it is very much community-oriented, the film has the potential to be particularly motivating for people who work as teachers, community leaders, and parents. On this page you’ll find a few thoughts on how Colors of a Creative Culture can work in the classroom or in other community contexts. What follows here are several topics for discussion following a viewing of the film, with an emphasis on ideas which might lead to group projects or other actions and activities.

Each community — in Brazil, in the United States, and elsewhere — has its own cultural heritage, history, economic realities, and physical characteristics. Is the city of Salvador, where the film takes place, very different from your community? What do the people there share in common with your community, and what are the differences? Given these characteristics, would the arts projects depicted in the film work well in your community?

What are the differences between public art, graffiti and display advertising?

In many places and cultures, creative work is most often rooted within the context of surrounding points of reference such as community, ritual and belief, politics, or cycles of nature. In some European and American art, by contrast, there is a stronger component of individualism, a sense of the artist as the lonely visionary, and an emphasis on purely personal self expression. Are these two orientations incompatible? Does one have greater validity than the other? Do artists in your community tend to reflect one approach more than the other?

The artists and young people in Colors of a Creative Culture combine self-expression with community improvement using paints and brushes. Are there other, similar activities that could serve the same purpose? Would your community be better suited to different sorts of activities?

A few ideas: If the creative re-painting of public places isn’t really needed in your town, then how about: