Found Sounds Bahia, which tags along with Jair Rezende (artist, activist, and wildly creative leader of the music band LACTOMIA), reminds us of two things: 1) a creative spirit needing expression lies within us all, and 2) as the old saw says, necessity is the mother of invention. In Salvador, Bahia (in Brazil), Rezende, his friends, and “family” (children drawn to this positive Pied Piper simply to be part of the band and movement) create both beautiful costumes and danceable percussive music out of the detritus of modern society. Flour sacks are transformed into brightly-painted skirts, while paint cans, cardboard boxes, old pipes, and coolers become instruments. Filmmaker David Zucker often adopts a cinéma vérité style, focusing the viewer’s attention on LACTOMIA’s infectious, joyous sound, coupled with the visual pleasure of watching the band play in the street before hundreds… and later thousands at NYC’s Lincoln Center. Comments from UCLA anthropologists and a Brazilian music scholar shed light on the need for creative expression, which the “found sounds” movement satisfies – not only in Bahia, but throughout the world (Project Found Sound has indicated plans for a Spring 2009 release entitled Project Found Sound that will include Haiti, Cuba, Dominican Republic, and Panama). DVD extras include bonus interviews, which underscore the fact that many of the kids might have turned to drugs were it not for the community of LACTOMIA. Highlighting the dual powers of music and creativity to help bring a poor community together, this uplifting documentary is highly recommended. [Note: also newly available at the same price is Colors of a Creative Culture, David Zucker's companion documentary on visual artists in Salvador, Brazil.] Aud: C, P. (A. Jacobson) ***1/2

A major component of the “green movement” is the recycling and reuse of objects found in our everyday world. This inspiring and entertaining program illustrates how that concept takes place in Bahia, an eastern province on Brazil’s Atlantic coast, but it’s an idea that’s transferable around the world and beyond the scope of this film. Young people utilize leftover and discarded items to craft percussion instruments as well as decorative fashions in a celebration of their African-Brazilian culture. The program is useful on a number of levels. It highlights the ecological benefits of finding value in unwanted/discarded objects and inspires young people to take pride in their heritage to promote a sense of community. While the narration is in English, most of the interviews with the Bahian people are in Portuguese, so the option of subtitles in English as well as Portuguese is useful.  The basic program focuses on the efforts of Jair Rezende to popularize the growth of such a movement in Bahia, which is also common throughout other Latin American and Caribbean countries. The Lactomia group has toured extensively and advanced the popularity of this upbeat, rhythmic sound as well as the flashy, colorful accompanying costuming. An 85-minute additional segment offers an interview with Rezende as well as video of Lactomia’s performances of its captivating music. A brief teacher’s guide can be accessed at projectfoundsound.com. This program’s usefulness can extend to a number of areas including the performing arts, anthropology, sociology, and environmental studies. (Dwain Thomas, formerly Lake Park High School, Roselle, IL)

Colors of a Creative Culture: Set in the city of Salvador in the Bahia district of Brazil, Colors of a Creative Culture introduces us to a number of artists (trained and untrained) who cover the walls of the city in vibrantly colored murals, what they refer to as “street interference art.” Their aim is to beautify the city by eliminating graffiti and advertising and to expose the community to art while trying to involve kids in creative and useful activities that would keep them out of trouble. The real strength of this program is the DVD extras, which include slide shows of the artists, interviews, and music videos.

Found Sounds Bahia focuses on Jair Rezende and the musical group Lactomia in the Candeal neighborhood of Salvador. This unique band encompasses the creation of music and costumes made from recycled materials. It also takes kids off the streets and gives them a music education and an opportunity to produce foot-tapping percussion rhythms in addition to performing around the world, including at New York’s Lincoln Center. As with Creative Culture, the best part of this program is the DVD extras, including concert footage and interviews with eight of the performers. Both of these programs will have strong appeal for ethnographic and cultural studies collections and are recommended for all music collections; Creative Culture belongs in art collections as well. The great variety of artistic styles represented in modern Bahia will be a revelation. Highly recommended. (Tom Budlong, Atlanta)

A vibrant film
David Zucker’s short but vibrant film, “Found Sounds Bahia” documents teenage conductor-impresario Jair Rezende and “Lactomia” — a bunch of kid percussionists-turned-’fashionistas’ as they alchemize disposable cans, plastic and bottle caps into an incredible variety of musical instruments, costumes and surrealist headwear which they take from their humble urban roots in a working class neighborhood of Salvador, Bahia to the empyrean heights of center stage at Lincoln Center. Their cultural inventiveness, joy and pluck is represents a grassroots contribution of ‘glocal’ culture to human happiness.

The nexus of the film is Lactomia and its members are so charming and so joyous that even a talking-head gallery of cultural anthropologists, ethnomusicologists and Worldbeat impresarios, including Carlinhos Brown (the band’s flamboyant patron) can’t bring it down. Zucker’s “Found Sound Bahia” shows ‘mea culpa’ mass-consumers that creative recycling can lead to a global warming of the soul!

Extraordinarily Compelling!
David Zucker has captured the true essence of what happens when children’s imaginations and creativity are allowed to flourish. This film reveals how music can be a positive force in any culture, for any age. Another important aspect of this film is the use of recycled materials to create amazing sounds. Zucker’s beautifully shot documentary shows us how this town in Brazil is making the most of their community and playing music that fulfills the soul.

Documentary filmmaker David Zucker explores the ways in which music can bring people together to partake in a common experience – even in places where material resources are sorely lacking – in this profile of Brazilian-based musician Jair Rezende. Rezende is a member of the band Lactomia. The band has hit a major social chord in his community of Candeal, and their unique approach of using recycled materials to create music has inspired local children to pursue their dreams regardless of the obstacles that may stand in their way. The children of Candeal flock to Rezende, proving that it’s always possible to achieve your goals, no matter how lofty they may seem, through innovation and creativity. (Jason Buchanan, All Movie Guide)

In The Colors of Creative Culture, a documentary by David Zucker, we are transported to an exotic world of color and sound in the heart of Brazil. This visual and auditory journey takes us into the dynamic creativity of a culture of artist and youth people living in the city of Salvador. The vitality of this piece is full of joy and inspiration — a testament to the power of imagination and heartfelt creativity of the people of Brazil. This experience tracks the intense interaction between professional artists, children, city employees and an artist who happens to be a priest.

The dance between painting and Brazilian rhythms mingles in the rawness of city life — creating a powerful, artistic movement flowing out of the essence of what it is to be human. Murals, painted walls, doorways, telephone poles and bridges, become the canvases of expression with street musicians, drum beats, the Berimbau and Capoeira dancers and the vital rhythms and voices of a people full of life and explosive, self expression.

To watch this film is an affirmation of the creative power of a community who cannot be held down! It expresses the deeply felt, human desire to create beauty and form. It gives us hope and shows us that Art is alive – never ending and growing in the midst of poverty and challenge. (Bob Bates Co-Founder & Artistic Director) 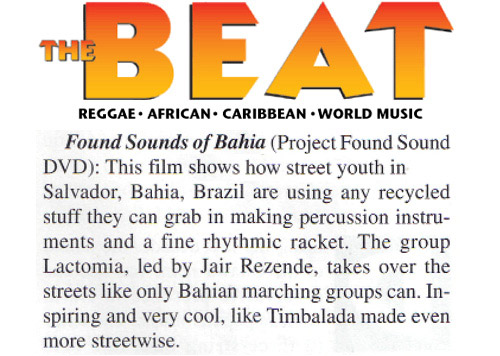 David Zucker’s camera is able to capture a powerful moment of emergence in Bahia, Brazil, a moment offering a promise for all whose socio-economic poverty has smothered spirit and creativity. Through the gaze of his lens, we are treated to an up close and personal sense of how image and rhythm has rooted hope and agency where hopelessness and helplessness have too often prevailed. We meet artists offering vibrant, flowing images on the surfaces of walls and buildings that shape an otherwise bland and desolate urban landscape. Yet these images and the rhythms that accompany their creation offer a transformative experience for the film audience. Here in the colors, textures and timbres we find an enthusiasm and vitality, which in the words of the artist/community activist Carlinhos Brown shifts the aesthetic of the favela. This is a document revealing how Bahian artists enter the public sphere and liberate creative energies. From a sense of material poverty emerges the richness of renewal through human expression. We see children excited and involved, transforming their environment with color and sound. An artist tells us he came to teach, but instead, is learning from the children and the hope for the future that unleashing their creative power has revealed.

A most wonderful aspect of this film is that it not only tells the story of a turning point for the favela, Candeal, and the artists of Salvador, Bahia, but it offers inspiration for all of us about the important relationships between creativity, hope and community. Through images and rhythms, life jumps out at us and offers lessons to imitate and teach others. Zucker is hopeful that the film will be used by teachers and libraries just for this purpose. We found ourselves inspired by the artists and children of Salvador to find ways to bring the lessons they teach into our professional and personal activities. (Ingrid Roze Ph.D. and Steven Knoblauch Ph.D., Faculty, New York University)